On Thursday, January 30, an Italian court reinstated Amanda Knox's guilty verdict for the 2007 murder of Meredith Kercher. Knox and her ex-boyfriend had been convicted in 2009, but the verdict was later overturned in 2011. Last year, an Italian high court overturned the 2011 acquittal and sent the case back to an appeals court in Florence. Knox, who is currently living in the united States and has made media appearances, states that she intends to fight the new verdict and will not go willingly back to Italy. 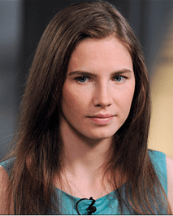 Knox's case is not only captivating for its global media coverage, but also for the fact that it highlights staggering differences between the American and Italian judicial system. In the U.S. criminal justice system, a person acquitted of a crime cannot be retried for that crime. Amanda Knox, who received an acquittal in 2011 by an Italian appellate court, was essentially found not guilty.

However, a higher court overturned the 2011 acquittal, tried Knox again, and ultimately convicted her. Under American law, this would not be possible. With this disparity, the question now becomes whether the U.S. government will accept the Italian court ruling– and eventually extradite Knox to Italy. Because the new trial and conviction is illegal under U.S. law, there is the possibility that she will not be extradited.

According to Attorney Jeremy Lessem – who was recently selected for inclusion to the 2014 list of Super Lawyers® – the case highlights the strengths and fairness of the American judicial system. "One of the great hallmarks of the U.S. criminal justice system is the idea of 'double jeopardy.' Once you have been acquitted of a crime, you cannot be prosecuted again for the same offense. This is part of what makes our system the best on Earth."